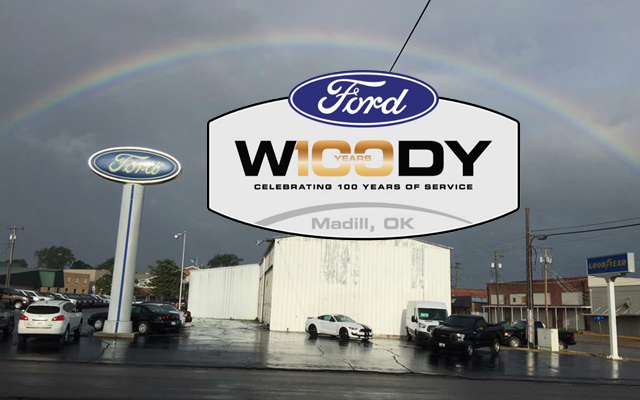 Did you know that Woody Ford in Madill, Oklahoma is the OLDEST Ford dealership in the entire state of Oklahoma? They’ve been a staple of the community for the past 100 years – first offering Ford cars for sale in 1920! But here are 4 fascinating things that have happened at Woody Ford you might NOT know:

1. When the business originally opened in 1916, it was a wagon yard – selling horses, mules & grain! It was owned by partners John L. Woody & A.M. McLelland. In 1920, Mr. Woody bought out his partner’s interest in the business and the building. Mr. Woody opened the business as a popular Ford dealership in 1920, where he and his son, Leonard Woody, worked together until John L. Woody passed away in 1933. Woody Ford is still at the same location of the original wagon yard – at 201 South 2nd Street in Madill. In fact, you can still see the slogan “DEALERS IN HORSES, MULES & GRAIN” on the side of the building today!

2. In the early morning hours of a June day in 1933, the infamous Bonnie Parker & Clyde Barrow stole a 1933 Ford Coupe from Woody Ford in Madill. The car belonged to the former partner R.D. Talliaferro. It was his NEW car. After Bonnie & Clyde left Madill, they drove through Kingston, where there was a shootout. The duo made their way back to Texas and, as they were trying to cross the Red River, they accidentally ran off the road and plunged into the river.

3. In 1941, Leonard Woody was called to active duty in World War II. His wife, Lucille, ran the business during his absence, despite never having a job before & knowing nothing about running a car dealership. Obviously Woody Ford survived the economic instability caused by the war, even though they only received 4 new cars, a few tires and no parts during the war.

4. In the late 1940’s, Ford cars were shipped to dealerships by rail. But they arrived completely disassembled! Meaning, the workers at the dealership had to build the car before it could be sold to a customer. At that time, Fords were selling for $2,500 fully equipped. However, demand for the cars in Oklahoma was booming. Woody Ford records during this time show sales of 400 or more cars each year – all sold to local residents.